Paradise of overcoming the sexes

The art historian Fabio Ricci describes in his book „Ritter, Tod und Eros” his first encounter with the main work of Elisàr von Kupffer with the following lines:

When I visited the site [of Monte Verità] for the first time in 1997 as part of my studies on life reform, I was confronted with the monumental circular painting by Kupffer. An elderly couple entered the exhibition space with me and, like me, they were amazed. After a few minutes of silence, first in a whisper, then swelling, a dispute between them made its way. The argument, triggered by the viewers, seemed to revolve around a gender determination of the characters. „No, if they were women, they would have breasts,” said the woman. „No, if they were men, they would have real genitals,” said the man. More silence and more amazed looks. The man angry, the woman perplexed, a shrug followed, then the visitors turned around and left the 360​​° view. The discovery of a deficiency and the simultaneous merging of apparently opposite sexual characteristics were so irritating that they drove the viewer out of the visual paradise of overcoming the sexes.

Many unprepared viewers of the panorama must have experienced this or a similar experience. In his autobiography, Elisàr von Kupffer writes that he had the inspiration for the round picture at the age of six. Even then, in a dream, he saw a figure on a giant nymphea.

Clarism and its Parthenon frieze of belief in eros

Over time, the child's dream turned into a philosophical-religious vision – Clarism. Around 1920, in the literature of Elisàr von Kupffer and Eduard von Mayer, the first references can be found to the realization of the clear world of the blessed, the „Parthenon frieze of the belief in Eros”. In 1923, Elisàr von Kupffer began working on his monumental work. First in a small attic apartment in Muralto, later in the newly built Villa in Minusio. It was still written in the stars where the circular painting would ultimately find its proper place. It was thought to be a frieze of a sacred room in the Holy Castle of the Clarist Community.

Elisàr von Kupffer and Eduard von Mayer promoted their vision of a temple of the clarists in many places. In Eisenach, the town under the Wartburg, the idea met with approval in 1926. The Thuringian Gauleiter Fritz Sauckel wanted to make Eisenach a „cultural center of the empire”. The construction of a new religious temple fit into the concept of Nazi-friendly circles. The model of the Holy Castle, pictures by Elisàr von Kupffer and parts of „The Clear World of the Blissful” were therefore exhibited in Eisenach. Opponents of the project denigrated the project and pointed out the gay component, accusing the two of participating in the „perverse goings-on” on Monte Verità.

The two then withdrew their project. The presentation of part of the circular picture in the gallery of artist friend Clara Wagner-Grosch in Locarno is also documented. Most of the visitors saw parts of the circular picture hung flat in the villa. If you were interested, the parts were reassigned and shown individually. One of the many visitors was Kurt Tucholsky. In his novel Schloss Gripsholm (1931) he set a literary monument.

The Sanctuarium Artis Elisarion as a sacred castle

Thanks to an inheritance from Clara Wagner-Grosch and grants from the public sector in the sense of a job creation measure, the villa was expanded with a rotunda, which was open to visitors from the spring of 1939. Prominent visitors at this time were Federal Councilors Rudolf Minger, Enrico Celio and Giuseppe Motta with this wife.

In 1942 Elisàr von Kupffer died at the age of 70. After the end of World War II, a new era began. In the Grüner Heinrich, a short-lived literary-satirical magazine, the Sanctuarium Artis Elisarion was ridiculed. The gay magazine Der Kreis also found that Elisarion's work was „terrible kitsch”. The audience's interest waned.

In 1960 Eduard von Mayer died. In a complicated will, the property went to the municipality of Minusio and the canton of Ticino. The canton renounced his inheritance. The housekeeper Rita Fenacci still had the right to live in the buildig. She rented part of the villa's rooms to foreign workers. When she died in 1973, the municipality of Minusio had no idea what to do with the gift. The villa stood empty for many years and was left to decay. Finally, the decision was made to turn the building into a cultural center, which was opened in 1981 after extensive renovation. In order to comply with the will, some rooms have been set up as the Museo Elisarion.

A painting on canvas in a special Affresco technique

The cyclorama „The Clear World of the Blissful” was intended as a fresco. Elisàr painted this on canvas when there were no walls. There are 17 parts in total. The artist used chalk canvas. He could hang this up on some auxiliary wall and then, using the white chalk ground as color, transform it into a luminous painting. The execution on this painting ground required a new painting style in order to guarantee the highest level of transparency and weightlessness. The job was done by rubbing the colors into the chalky fabric. In a certain sense, it is an implementation of the watercolor technique that is also used in frescoes. The painting is therefore very sensitive to water, moisture damages the picture. The condition of the painting before the restoration also suggests that the individual parts were dismantled from the walls of the rotunda without great care and put together, ready to be transported to a cellar of oblivion ... Harald Szeemann prevented this at the last possible time.

The 33 scenes of the cyclorama are explained in a poem. (In German and in a short version in Italian)

Detailed examination: The cyclorama (in the state before the restoration) is also available in larger resolution:

Large view of the cyclorama for close-up scrutiny

Harald Szeemann explains the The Clear World of the Blissful

Documentation of a tour from 1998. 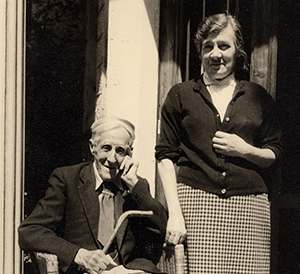 After the death of Elisàr von Kupffer in 1942, Eduard von Mayer referred to himself as the „Keeper of the Sanctuarium Artis Elisarion”. After his death in 1960, Rita Fenacci took over this task. According to the will, the entire property of the two gentlemen went to the municipality of Minusio and the canton of Ticino. This renounced his inheritance. The municipality now had to pay inheritance taxes respectively high gift taxes to the canton and the Swiss Confederation for the inheritance. To settle this, another property from the inheritance of the two gentlemen in the Locarno area was sold. The rental income from this property has so far served as a means of subsistence for the residents of the villa. Ms. Fenacci now had the right to live in and dispose of the sanctuary, but no longer had any income. In times of need, she rented part of the former living quarters to foreign workers. The decay of the artistic legacy began …