Deutsch
Italiano
English
Elisarion > The cyclorama > The restoration
My donation

Concept to preserve the painting

After the death of Eduard von Mayer in 1960, the Sanctuarium Artis Elisarion in Minusio became dilapidated. The panorama was also damaged, especially due to water damage as a result of the leaky roof. In 1973, after the death of the former housekeeper, control of the building passed to the Minusio community. After years of political back and forth, the decision was made to convert the house into a cultural center for the community.

The circular painting, saved by Harald Szeemann, found its place in a pavilion on Monte Verità. The condition of the painting also deteriorated noticeably at the new location.

The Pro Elisarion association – founded in 2008 with the aim of preserving the work of Elisàr von Kupffer and Eduard von Mayer and making it known to a wider public – provided the decisive impetus. A concept could be developed for the long-term preservation and a contemporary presentation of the circular painting, which has so far been neglected. Spirituality and aura, as they once reigned after 1939 in the Sanctuarium in Minusio, should also be made tangible again.

In addition to the overall restoration of the cycle of paintings, the concept also included the reconstruction of a lost part of the picture measuring 1.8 x 2.5 meters, the replica of the canopy that was destroyed after 1973, and a small accompanying exhibition on Elisàr von Kupffer's world of thought.

The core idea of ​​the restoration concept for the painting was based on the idea of ​​combining the 17 individual, unevenly shaped painting parts into a round picture, analogous to the large panoramas from the 19th century. To achieve this, the individual painting strips were attached to a wooden ring (purlin wreath), put together and stretched into a circle at the lower edge of the painting with the help of weights and a metal ring. The 3.3 meter high painting now has a circumference of 28.6 meters and a diameter of around 9.0 meters, which corresponds to an area of ​​94 m2.

Since the individual parts of the picture were in a very poor condition in terms of conservation, the countless folds and waves of the canvas had to be leveled out with the help of a vacuum and special vacuum tables in a first work stage. The flaking paint layer was also strengthened in this way and thus saved. The painting could then be cleaned in order to give it back some of its originally lively colors.

A major challenge was the joining of the completely irregular image paths in order to attach them to the purlin in an exactly straight line. This was achieved by attaching strips of fabric in order to achieve the rectangle necessary for the voltage. In order to be able to fix the painting strips to the purlin, perforated plastic strips were worked into the edges (Fig. 4).

The image paths then had to be positioned in the same way that the images would fit together exactly after they were connected. The hyperboloid typical of panoramas was achieved through the metal ring at the lower edge of the picture and the weights attached to the picture. (Fig. 5).

The restoration of the painting could only be carried out after this work was completed. Since the budget was limited, it was decided to first retouch the heavily damaged sky so that the viewer had a more uniform impression of the painting. A large part of the painting has to be completed at a later point in time in order to bring the original colors and luminosity of Elisàr von Kupffer painting back to life.

A very important part of the reconstruction work concerned the addition of the part of the picture above the entrance. The so-called „Supraporte” (about 3.5 m2) is considered lost and was reconstructed using a historical black and white photo in such a way that the circular painting can again be presented as a closed one. Before doing this, a new entrance situation had to be created from a wooden pole construction (Fig. 6 and 7).

With regard to the rest of the design of the entrance area and the cover at the top and bottom of the picture, a simplified and restrained color scheme was chosen.

In order to be able to recreate the historical experience of the „Sanctuary” for the visitor, the canopy inside the circular picture was reconstructed from old photos and watercolors together with its floral decoration.

The color scheme of the anteroom is based on a watercolor by Elisàr von Kupffer, which shows the original anteroom in a dark blue.

The restoration and reconstruction work on the painting was carried out by Petra Helm, Christian Marty and Wolfgang Müller.

The canopy was reconstructed by Roger Martin in collaboration with the Pro Elisarion association. 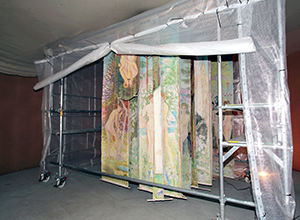 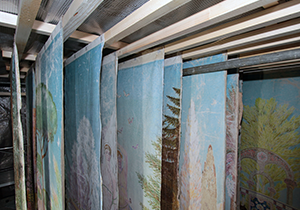 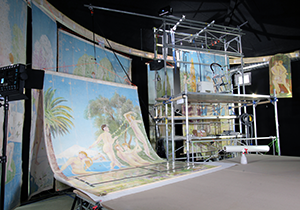 Fig. 3: Consolidation of the paint layer 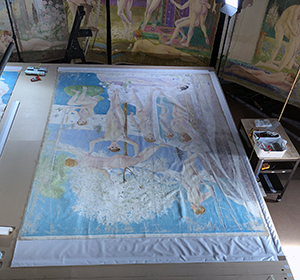 Fig. 4: Attachment of fabric strips for the seamless joining of the image strips 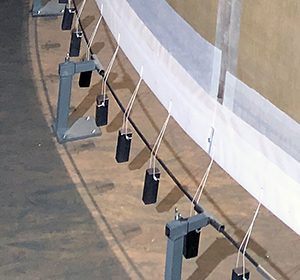 Fig. 5: Detail of the restraint device with weights 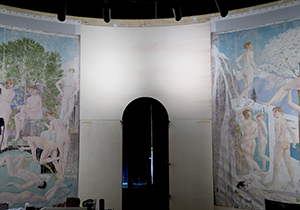 Fig. 6: Construction of the entrance as in the sanctuary 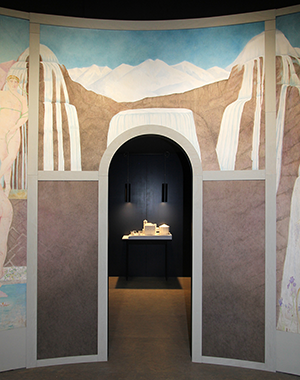