Presentation by David Streiff on the virtual opening of the restored pavilion,
April 2021

Harry Szeemann was the initial reason for the foundation of Pro Elisarion association. At the end of the seventies he had saved the cyclorama and other works from the Elisarion in Minusio and made sure that „The Clear World of the Blissful” could go on traveling to exhibitions. Afterwards he made the cyclorama accessible again – accompanied with paintings and materials on Elisàr’s philosophical and theological theories – in a pavilion financed privately by him on Monte Verità – the same, witch now is air-conditioned and renovated.

When Szeemann died in 2005, we knew: From now on there is no guardian of this legacy. It was concern of us association founders that the attention of Elisàr’s work would decline furthermore and the disintegration continues. It was therefore for us reason of taking care in his sense of this unique, but endangered legacy.

The decisive impetus for founding the association came from the publication of the first scientific book on Elisàr von Kupffer, written by the German art historian Fabio Ricci under the title „Ritter, Tod und Eros” (Knights, Death and Eros), which the author presented in October 2007 on Monte Verità.

In December 2008 the association was founded in Zurich. We formulated four goals in the objectives of the statutes:

We achieved three of these goals twelve years later,
at the beginning of April 2021

Better awareness of the work of Elisàr von Kupffer

Elisar's legacy was made comprehensible through the exhibition in Minusio, which opened in 2011 in the original rooms. This succeeded because the community of Minusio offered us, thanks to Joel Morgantini and Anita Ammann, hospitality. We faced this task in intensive collective free work – with as much joy as improvisation, because there was not much money available.

With the active support of the custodian Claudio Berger, we were able to reconstruct the cultic tour through the house, mount a copy of the round picture printed on photo canvas in the rotunda, exhibit the most important paintings by Elisàr and show countless materials on the life and work of the two gentlemen in twelve showcases.

Decisive for this presentation were the photo holdings in the estate, which Memoriav helped to digitize. They are largely images that Szeemann had never seen before. They became the basis for the later restoration of the cyclorama.

To accompany the exhibition, we were able to create a bilingual brochure financed by the Centro Culturale Elisarion. In it, in numerous illustrations, many of the little-known paintings and newly discovered photos got to known to a wider audience.

This exhibition laid the foundation for what followed – i.e. goals 2 and 3 in the statutes:

the restoration of the cyclorama „The Clear World of the Blissful”

First, the Minusio municipality's decision to renovate the pavilion on Monte Verità and its contents with 250,000 francs.

Secondly, our effort to persuade to contract not just any, but the best restorers for this task, Petra Helm and Christian Marty, who among other things had shown what they can with the panoramas of The Battle of Isel Mountain in Innsbruck and the Bourbaki Panorama in Lucerne.

Thirdly, the willingness of the Fondazione Monte Verità to view the Elisarion pavilion as an integral part of its museum complex and to take it under its wing. Although historically the world of Elisàr and that of the Monte Verità existed at the same time, they were historically separate worlds. Szeemann initially only had seen that as an emergency solution because the original building, meanwhile set up as a cultural center, was no longer available.

It quickly became clear that the municipality's basic amount would not be enough, as it was also necessary to upgrade the climate of the shell – the pavilion and to renovate it: this part of the work was the responsibility of Mister Geronzi and Zanetti.

Contextualization was also part of it, i.e. the embedding of the round picture in the larger context of Elisàr von Kupffer's and Eduard von Mayer's spiritual world. Here Andreas Schwab could be won, who already knew how to exploit today's possibilities of digital communication when the new Casa Anatta was set up and who summarized all the information in the anteroom to the cyclorama that is needed to understand Elisàr’s oeuvre.

In the end it was a matter of realizing the canopy, which was part of the original staging of the circular image, as we know from photos and pictures. Our board member Lukas Piccolin and decor maker/set designer Roger Martin took over the realization.

So over the past seven years, fundraising has become an important part of what we do. Through membership fees, donations and crowdfunding, considerable amounts have been raised over the years; We also managed to win the Rozalia Foundation and Pro Patria for this project.

After these years of commitment, you can imagine to what extent the reopening of the newly designed pavilion is a happy day for the whole association, which we would have liked to have celebrated differently if Corona hadn't got in the way.

We very much hope that with your active help we will motivate many people to look at this new part of the attractions on Monte Verità. And that they all pay attention to the visitor rules shown in the entrance area and thanks to the supervisors advice – that they stay respectfully under the canopy and do not step too close to the cyclorama.

We thank everyone for their great commitment, without which we could not celebrate today. They are all listed on the colophon.

In addition to those already mentioned, Stefano Micheli and those responsible for the Fondazione Monte Verità deserve special mention. It was not always easy for you to handle the complex project as a whole. In the first phase I will mention Lorenzo Sonognini and later Stefania Gallo and Nicoletta Mongini. You will also have to deal with the use of the pavilion in the future. For this, too, we would like to thank very much.

We will support the success of the new Elisarion with the means available to us. But our future tasks are not exhausted with this, because we would like to accompany the remaining, last stage of the restoration, i.e. the work on the retouching, by once again going to the fundraising, and then on to the fourth, not yet make the focus of our goals fulfilled: the processing of the written legacy. 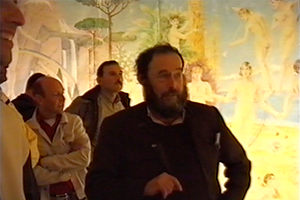 Harald Szeemann explains the panorama to the members of Network Gay Leadership, 1998. 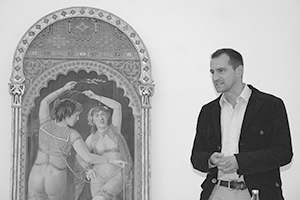 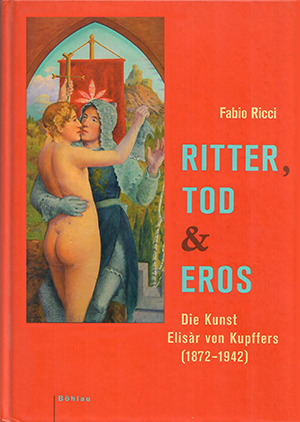 The first scientific book on Elisàr von Kupffer, published in 2007. 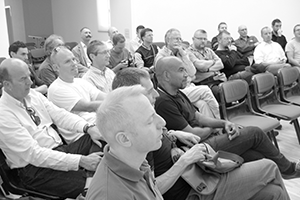 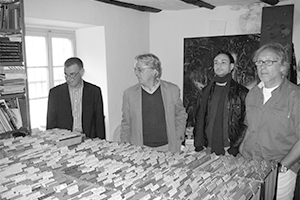 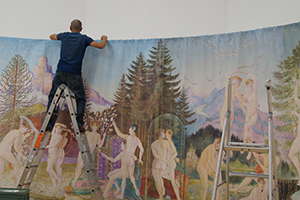 Hanging of the photo canvas for the exhibition 30 Years of Centro Culturale Elisarion, 2011. 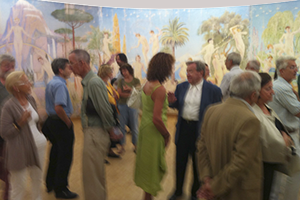 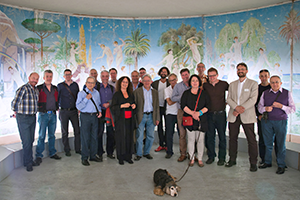 Members of the Pro Elisarion Association at the 2014 General Assembly. 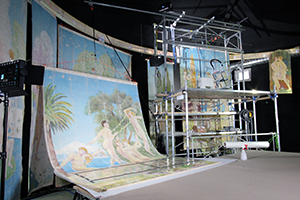 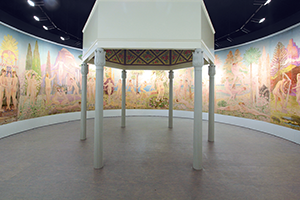 Situation with the restored canopy, April 2021.