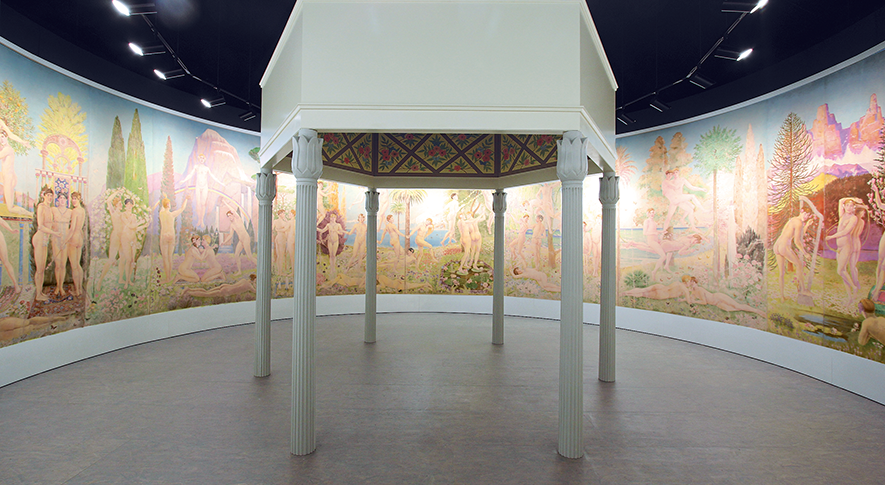 The cyclorama by Elisàr von Kupffer is secured for the future. It can be viewed in the restored pavilion on Monte Verità.

The Parthenon Frieze of the Belief in Eros

In his autobiography, Elisàr von Kupffer wrote that he had the inspiration for the cyclorama at the age of six. Even then he saw in a dream a figure on a giant nymphaea, which is a clear indication of Buddha's birth or the later birth of his own religion. Around 1920, the first references to the realization of the Clear World of the Blissful, the „Parthenon Frieze of the Belief in Eros” can be found in the literature.

In 1923, Elisàr von Kupffer began to work on his monumental „Clear World of the Blissful”, which he completed in several stages by 1929.

In a cycle of changing seasons and landscapes, the round picture depicts 84 completely unclothed figures, often adorned with flowers or calf bands, with suggested aureoles in 33 groups of motifs, which give the picture space its rhythmic structure. The middle and background are clearly separated from each other. The linear composition is clearly structured: while in the background a horizontal line is revealed by the horizon line and in the foreground by the recumbent figures, while in the middle distance different verticals are revealed by the trees, the groups of figures form numerous pyramid-shaped line arrangements, some of which are shifted into one another and which are the static ones dissolve the entire construction. Flocks of butterflies repeat the style of the groups of figures and give the round picture a rhythmotropically motivated linear composition, which should energetically involve the viewer of the 360° representation in the idea of paradise.

The mountain landscape shown in the background runs through the seasons of winter and spring. Then a flat, mediterranean and summer landscape is shown in front of a background of water and snow-covered mountains. In the representation of autumn, the landscape rises again to a mountain range. In the middle distance, next to wooded or snow-covered hills, there are various trees from different climatic zones and in different growth phases. Different landscapes and types of vegetation, colors and phenotypes are lined up in order to depict nature in the complexity of its tropic effect.

However, the rooms of the „Sanctuarium Artis Elisarion”, built according to his plans in 1927, were not large enough to present the entire cycle, and there was a lack of suitable exhibition space. The painting parts therefore had to be hung in separate rooms and hung one above the other. Only the completion of a 12-sided adjoining building (rotunda) in 1939 made it possible to present the entire cycle in a continuous sequence. From now on, the lighting was via a glass roof – similar to the tradition of panorama paintings of the 19th century. In the center of the room there was also a colorfully painted canopy supported by six columns, under which the viewer could stand.

Photographic evidence suggests that the painting pieces were attached directly to the wall. After Elisàr von Kupffer's death in 1942, the round picture remained in its original location in Minusio until around 1976, where it narrowly escaped destruction thanks to the intervention of the art historian Harald Szeemann.

Szeemann then exhibited the cyclorama in Berlin, Lyon, Munich, Vienna, Zurich and Basel. From 1987 it is exhibited on Monte Verità in a wooden exhibition building built by the architect Christoph Zürcher.

Part of the Szeemann Exhibition on Monte Verità

From 2019 to 2021 the pavilion was restored and equipped with modern air conditioning. The cyclorama could be professionally installed in it. Together with the re-erected canopy, the round picture presents itself again as it was to be experienced in the Sanctuarium Artis Elisarion in Minusio.

The cyclorama of Elisarion
is secured in terms of conservation.
Its spirituality and aura
can be experienced again. 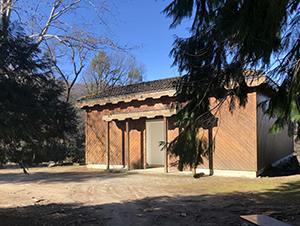 The round picture can be viewed at the same time as Casa Anatta. 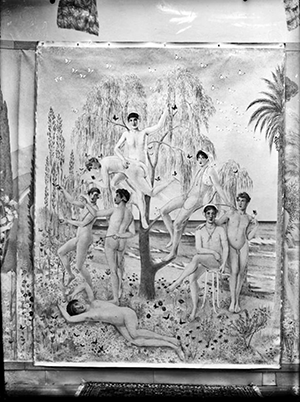 Before the construction of the rotunda in 1939: the individual parts of the cyclorama were hung flat