Elisarion – Conversation of the Clear Wolrd

When ELISARION spent hours of cheerful silence in the midst of his CLEAR WORLD in the summer months of 1941 and again in 1942 – knowing about the approaching danger and redemption – it was for him: the beings and forms of his creation began to speak; and he overheard them. And as a poet recorded what they said among each other, remembering the distant moments of their earthly days. What had once been experiences of the heart and eyes for Elisarion, then condensed into inner images, finally re-embodied into form and exchange, now appeared again in his mind as personal life. So he took part in the round dance and rainbow of his own perfect existence, like before an otherworldly radio play, before the „we“ conquered „myselfs“ – where the fermenting drama of life became a symphony and „Eidyllion“: like a Bach „Aria in G major“, a Beethoven „Spring Sonata“, a Boccherini or Mozart minuet – divine euphony after the „screams“ of this torn world of daemons, the confused world of negative beings. In Gluck's „Dance of the Blessed Spirits“, Elisarion felt that the „Clear World“ was set to music.

In the earthly visible familiar humanity – from beyond a world that is newly born in bitterest labor – the peaceful, eternal melody resounded to the pure, liberated heart, which Divine Spirit had graced to foreshadow her secret: the ordering „yes“ of harmony. Cordial harmony is the playful leitmotif of these conversations and poems of pure youth of the seventy year old.

Christmas 1942
in memory of Elisarion
Dedicated to
who saw his clear world, experienced
and loved it

The 33 scenes of „The Clear World of the Bissful“

The poems for the individual scenes are taken from a brochure which Eduard von Mayer published after the death of his companion Elisarion.

The foreword by Eduard von Mayer can be found in the left column. 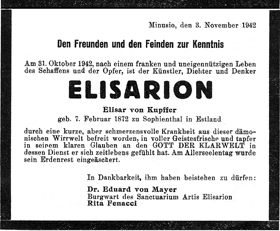 The poems for the cyclorama
«The Clear World of the Blissful»