In the course of the 19th and 20th century, many trends of a neo-religious or “scientifically religious” nature developed as a reaction to new insights in the natural sciences (Darwinism, New Definition of Matter, Mesmerism, etc.), the collapse of political systems, and the renouncing of institutional churches. These movements attempted to accommodate the bourgeoisie’s need for new value systems.

Helena Blavatzky’s (1831–1891) Theosophy represented one of the most important religious movements of this time. Many new philosophies, for instance Rudolf Steiner’s Anthroposophy, but also several others, which have yet to be examined, were inspired by it.

Clarism, the “new religion” that was founded by Elisàr von Kupffer and Eduard Mayer in 1900, also belongs in this context. The development of this concept was also a reaction to the monistic movements in the German-speaking countries.

The founding of several societies led to the institutionalisation of this faith:

The founders hoped that after about three generations the faith would have blossomed and would represent a so-called Eu-Democracy.

At the same time, Clarism must also be seen as a reaction to the widespread life reform movements, such as those at Monte Verità. The extensive theoretical writings on Clarism not only include special plans for agricultural and dietary reforms, but also the political concept of a “third way” between capitalism and communism.

The transformation of society was intended to be evolutionary, not revolutionary.

A specifically developed theory of the sexes represented an integral part of Claristic thought. “Das Mysterium der Geschlechter” (The Mystery of The Sexes) by Eduard von Mayer was published in 1923 and referred to Magnus Hirschfeld and Otto Weininger’s sexual theories. The founders of Clarism described equality between the sexes as the basis for an “ascending” society, and propagated many of the demands of the emancipation of women and homosexuals. However, like many other movements of the times, Clarism also contained misogynistic and anti-Semitic tendencies.

Clarism was primarily conceived as a religion. Consequently, plans for a sacred building were developed early on. In 1927 they found their implementation in the Sanctuarium Artis Elisarion.

The divinely ordained head of this scientific religion was to be Elisàr von Kupffer himself. In 1911 he gave up his common name and henceforth called himself Elisarion. 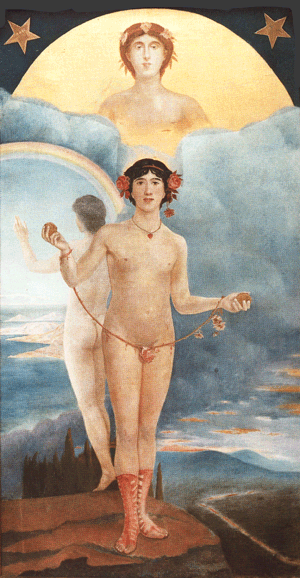 A kind of an altarpiece of the «Clarism» 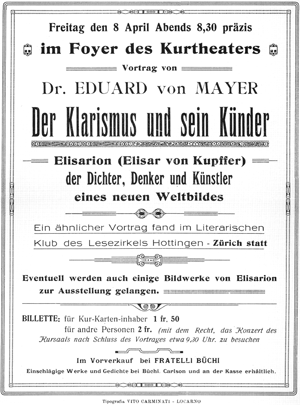 Invitation for a lecture in the Kursaal Locarno during de World Summit of the
Claristic Community, 1921