For the conservation of the artistic remains of Elisàr von Kupffer

The founding of the association occurred…

…in memory of Harald Szeemann to whom the work of Elisàr von Kupffer named Elisarion was important in connection with his research on Monte Verità. Thanks to him, the artist’s main work, the cyclorama “Klarwelt der Seligen” (The Clear World of the Blissful), could be preserved for posterity.

…on the occasion of the publication of an extensive evaluation by the art historian Fabio Ricci, Cologne at the Böhlau Verlag.

…out of concern for the cyclorama, which is in a precarious state, and due to the urgent need to secure the photographic remains.

The members spiritually and financially support:

the restoration of the cyclorama “Klarwelt der Seligen” (The Clear World of the Blissful) — currently located at Monte Verità, Ascona.

the long-term protection of the entire legacy including the literary remains.

Activities (only in German) 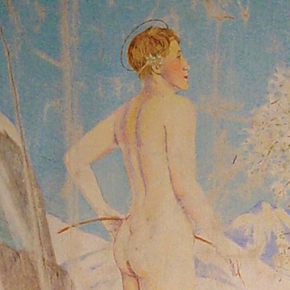 “The Clear World of the Blissful”, detail of the cyclorama