„The Clear World of the Blissful”, main work by Elisàr von Kupffer 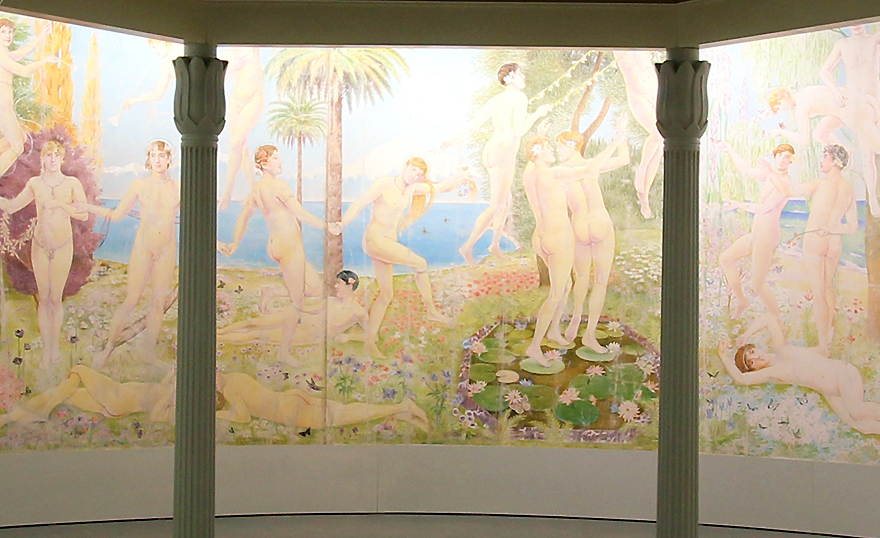 The central part of the cyclorama, as of April 2021

In his autobiography, Elisàr von Kupffer wrote that he had the inspiration for the cyclorama at the age of six. Even then he saw in a dream a figure on a giant nymphea, which is a clear indication of Buddha's birth or the later birth of his own religion.

The work of Elisàr von Kupffer is to be appreciated under two aspects. On the one hand there is the philosophical, new religious message, on the other hand the homoerotic point of view, which must be examined more closely.

The painting by Elisàr von Kupffer (1872–1942) has strong references to contemporary symbolism, in particular to Maurice Denis (1870–1943). Elisàr saw his works in the tradition of Boticelli and Gozzoli. The quality of the painting of these great models is by no means equal to the work of Elisàr. Many works are „sloppily executed”, they are more of a sketch than a finished painting. The impression of „second class” arises when one does not recognize or does not want to see the religious, philosophical and homoerotic aspects in their uniqueness.

The biography of the two men behind the work and the historical circumstances of the time show the search of an elite class of society for a new social order and a new lifestyle. This search resembles in many ways that of the first members of the „vegetable cooperative” on Monte Verità.

The circular image has now found its museum location in the Monte Verità museum complex. It is a complement to the structural and visual legacies of the dazzling community on Ascona's local mountain and a unique testimony to the emergence and development of modernity.

Around 1920, the first references to the realization of the clear world of the blessed, the „Parthenon frieze of the belief in Eros” can be found in the literature.

In 1923 sketched figures were transferred to the large canvas using a grid process. The first parts of the colored version must have been completed in 1924. At that time they were shown to the public in the gallery of their friend, painter and gallery owner Clara Wagner-Grosch. In 1927, parts of the round picture were provisionally exhibited in the not yet completed sanctuary. Only in 1939 was it permanently installed in the specially constructed rotunda.

In a cycle of changing seasons and landscapes, the circular painting „The Clear World of the Blissful” depicts 84 completely unclothed figures, often adorned with flowers or calf ribbons, with suggested aureoles in 33 groups of motifs that give the pictorial space its rhythmic structure. The middle and background are clearly separated from each other. The linear composition is clearly structured: while in the background a horizontal line is revealed by the horizon line and in the foreground by the recumbent figures, while in the middle distance different verticals are revealed by the trees, the groups of figures form numerous pyramid-shaped line arrangements, some of which are shifted into one another and which are the static ones dissolve the entire construction. Flocks of butterflies repeat the style of the groups of figures and give the round picture a rhythmotropically motivated linear composition, which should energetically involve the viewer of the 360° representation in the idea of ​​paradise.

The mountain landscape shown in the background runs through the seasons of winter and spring. Then a flat, mediterranean and summer landscape is shown against the background of a body of water and a snow-covered mountain range. In the representation of autumn, the landscape rises again to a mountain range. In the middle distance, next to wooded or snow-covered hills, there are various trees from different climatic zones and in different growth phases. Different landscapes and types of vegetation, colors and phenotypes are lined up in order to depict nature in the complexity of its tropic effect.

The 33 scenes of the cyclorama are explained in a poem. (In German and in a short version in Italian) 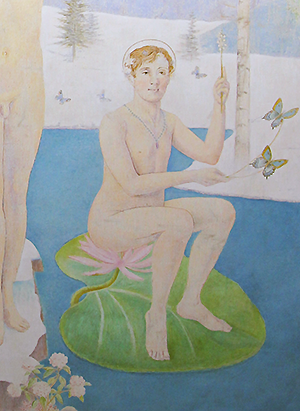 On the big flower

Harald Szeemann explains the „The Clear World of the Blissful”

Documentation of a tour from 1998.