Monte Verità – the mountain of truthfulness

Switzerland has a unique testimony of the spiritual awakening into modern times: Monte Verità above Ascona. In the autumn of 1900, the son of a Belgian industrialist, Henri Oedenkoven and the Austrian pianist Ida Hofmann, together with the artist Gustav Arthur Gräser and the teacher Lotte Hattemer, bought the Monte Monescia hill above the village Ascona. They renamed it to Monte Verità and founded a «vegetable cooperative». It was a settlement community on a vegan and later vegetarian fundamentals. The new name did not claim to be in possession of the truth. Rather, this should express the effort to live truly. In order to finance the settlement project and at the same time to make it known to a wider public, the natural sanatorium «Sonnen-Kuranstalt» (Sun Cure Institut) was established, followed by the Sanatorium Monte Verità.

The place rapidly developed into an exclusive place for curing civilization diseases, then widespread in the wealthy part of the society. Therapy was (naked) sunbathing, vegetarian food and outdoor gymnastic exercises, including dancing under instruction. Prominent visitors in the early days were the German wandering preacher Gustaf Nagel, the writer and later leader of the Munich Soviet Republic Erich Mühsam with his partner Johannes Nohl. The German Crown Prince Wilhelm von Preussen (the son of Emperor Wilhelm II) and the King of Belgium Leopold II can also be found among many others in the list of guests.

Through friends of the co-owner Gustav Arthur Gräser, Monte Verità became a colony of artists as well. For example, Rudolf Laban, today he is seen as the father of the expression dance, was here pedagogically and artistically active from 19013–1917. The German expressionist dancer Mary Wigmann was perfoming and teaching here too, as well as Charlotte Bara.

To the perimeter of Monte Verità belonged writers such as Hermann Hesse, Gerhart Hauptmann, Max Weber, Ernst Bloch and many other important European intellectual leaders. The great Swiss psychiatrist and psychologist Carl Gustav Jung regularly held seminars here. They were guided by ideological interests: life reform, spirituality, pacifism, rejection of the given live conditions at those times by state, church and society. The realization of freedom in every aspect and the search for truth was the motive – cultural and social change the goal.

In the 1920s the German baron Edward von Heydt acquired the property. As a sanatorium and hotel, he let build the hotel and congress house that still exists today. The original order for the building went to Mies van der Rohe. His rational, functional architectural style influenced by the Bauhaus was then executed by Emil Fahrenkamp. Also various villas and residential houses were erected in the surrounding.

In the post-war years the brillant reputation of Monte Verità disappeared. Baron von Heydt passed the property by his last will to the canton of Ticino, wich is the owner since 1964.

The Swiss sunny corner as a refuge

From 1830 on, Switzerland, a republican state based on justice and integrity, became a place of living for mostly wealthy political refugees. Many took residence around Lugano and Locarno. Thus also the Russian revolutionary Bakunin, who had moved to Ticino in November 1869. He lived first in Locarno and bought later a villa in Minusio. His home became a refuge for foreigners who were sought by police wanted poster in their original country.

The Russian baroness Antoinette de Saint Léger was the great host of many famous artists. Place of glamourous parties were the Brissago Islands, which had been in their poperty since 1885. Around 1889 the Swiss politician and theosophist Alfredo Pioda, together with Franz Hartmann and Countess Constance Wachtmeister, developed the plan to erect a theosophical monastery called «Fraternity» on Monte Monescia. In this tradition Monte Verità was born.

The homeless also included the two friends and partners Elisàr von Kupffer, 1872–1942, and Eduard von Mayer, 1873–1960, two successors of the Baltic-German nobility. Von Kupffer was born in today's Estonia and von Mayer in today's Ukraine. The two idlers did have artistic, literary and philosophical interesses. They also took residence in the Ticino, first in Muralto, from 1927 in a villa Sanctuarium Artis Elisarion erected by them in Minusio. (Both places are located near Locarno). They always remain a critical distance from the hustle and bustle on Monte Verità. Nevertheless, their search to live truly and their philosophical concepts resemble in historical retrospect the ideas and concepts on Monte Verità.

Awakening kiss for the Sleeping Beauty

Harald Szeemann, the brilliant Swiss curator and exhibitor, saved Monte Verità from disappearing in the consciousness of subsequent generations. The exhibition Le Mammelle della verità (The Breasts of Truth) in 1978 on Monte Verità, in the Museo Comunale and the Teatro San Materno showed the important historical developments they began here. The exhibition found its place in the Casa Anatta on the Monte Verità after several stations (among others Kunsthaus Zürich).

To the circumcircle of Monte Verità, did belong for Szeemann the work of Elisarion too. Already in the Monte Verità exhibition in 1978, he showed photos and a model of the Sanctuarium Artis Elisarion in the original state. After being able to rescue the cyclorama The Clear World of the Blissful at last minute from the Sanctuarium Artis Elisarion, Szeemann sought to make it accessible to the public at Monte Verità. With private donations, he could erect a pavilion, in which the cyclorama is shown since.

In the meantime, the ravages of time did its work on the buildings of Monte Verità. The Casa Anatta had to be closed. The canton of Ticino, the muncipality of Ascona, surrounding municipalities and private donors have provided financial capacity for the urgent renovation. Today, the hotel is refurbished, the light-air hut Casa Selma and the Russian house as well, a tea-park has been laid out and the complete renovation of the Casa Anatta is finished. Since may 2017, it’s open as a museum to the public.

Help, that the restoration of cyclorama becomes a reality. 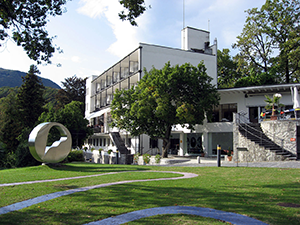 The former sanatorium and today's hotel and convention center, built in Bauhaus style in 1928 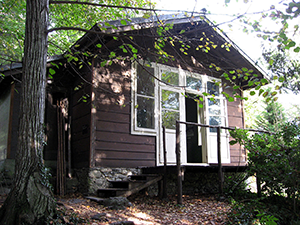 The Casa Selma, one of the light-air huts from the early days of Monte Verità 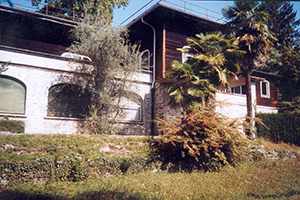 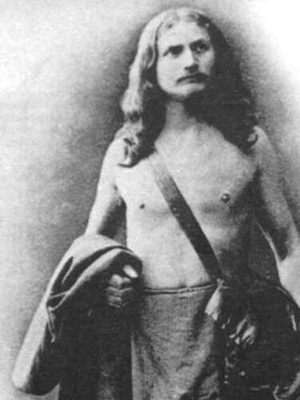 The German wandering preacher Gustaf Nagel,
one of the first prominent visitors 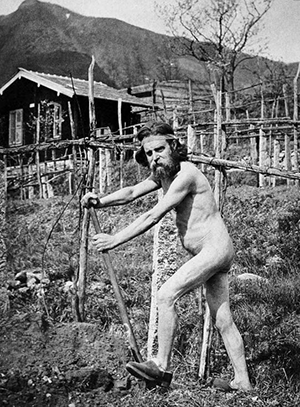 The vegan food was planted by self on the hill,
around 1907 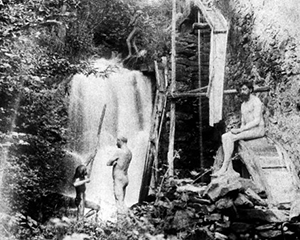 The author and anarchist Erich Mühsam (right) with Raphael Friedeberg (second from the right) nearby Monte Verità, around 1904 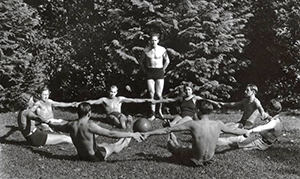 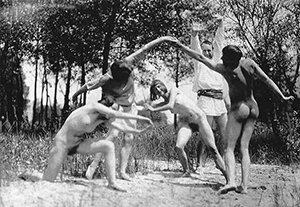 Expressive dancing under the guidance of
Rudolf Laban