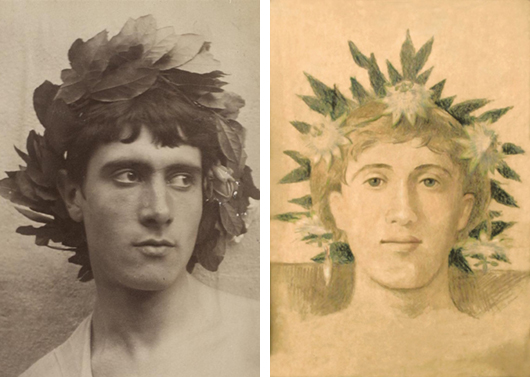 The boundaries between artistic idolization of the male body and homoeroticism are controversial and imprecise, particularly in the context of the Belle Époque era and early 20th century.

Baron van Gloeden’s work is perhaps the most extensive and well-known body of homoerotic photography from that period.

Strong circumstantial evidence points to his iconic photos of young Sicilian men as a source of inspiration for von Kupffer.

According to his autobiography, Elisàr von Kupffer and Eduard von Mayer visited Taormina, Sicily, on their Italian journey in 1897. Baron von Gloeden had lived there since 1876. It is highly probable that they met at that time. It is easy to presume that Elisàr acquired some of the baron’s photos. The shape of the snowy mountains in the cyclo­rama have a striking resemblance to the mountains on the photograph. Mount Etna, in clear weather visible from Taormina, is snow-covered through winter and spring.