Theosophical temples of reformers and cathedrals of art

Fidus Temple of the Earth

The small reformist community of „Grappenhof” in Amden and the community of Monte Verità, in informal contacts, were enthused by the project of Fidus.

The Swiss painter Otto Meier-Amden was loosely associated with the Grappenhof community.

Fidus’ Tempel of the Earth

Visualization of a celebration of reformers inside the temple

Sacred Castle of the Clarism Community

The idea advanced in 1926 below the Wartburg in the town of Eisenach, which the regional Nazi politician Fritz Sauckel wanted to transform into the „Cultural Center of the Reich”. The construction of a neo-spiritual temple fit the concept of Nazi sympathizers. Elisàr von Kupffer’s wooden model, pictures and parts of the Clear World of the Blissful were exhibited in Eisenach.

Opponents denigrated the project, pointing to its gay components, and accused the two of participation in „perverse activity” on Monte Verità. The two withdrew their project and erected a temporary center in Minusio.

Built by Elisàr von Kupffer and Eduard von Mayer in Minusio near Locarno. The angular villa was constructed 1925–1927, followed by the rotunda in 1939. The Sanctuarium Artis Elisarion was first conceived as a temporary location until the „Sacred Castle of Clarism” could be realized.

Venue and seat of the General Anthroposophical Society in Dornach near Basel. Built 1925–1928 according to plans by Rudolf Steiner. The expressionistic building is a substitute for its predecessor (below), which was destroyed by arson in 1923. 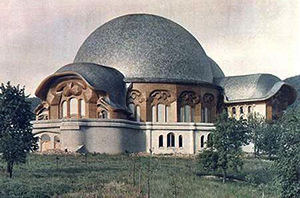 Erected 1924-1949 by the graphic desinger and artist Karl Bickel on the Walenstadtberg.

During his 13-month stay in Walenstadtberg due to tuberculosis in 1913, the majestic and quiet mountain world of the Walensee, stirred visions resulting in a strong contemporary religious or cosmic naturalist feelings. He vowed to build a peace temple upon recovery.

The figures on the right and left walls represent the life cycle of man.

Erected in 1926-1930 by the artist couple Johann and Jutta Bossard in the Lüneburg Heath near Jesteburg. The Temple of Art is the only one of the visionary-utopian cathedral buildings of that era in Germany which has actually been erected and has been preserved.