Harald Szeemann explains the The Clear World of the Blissful 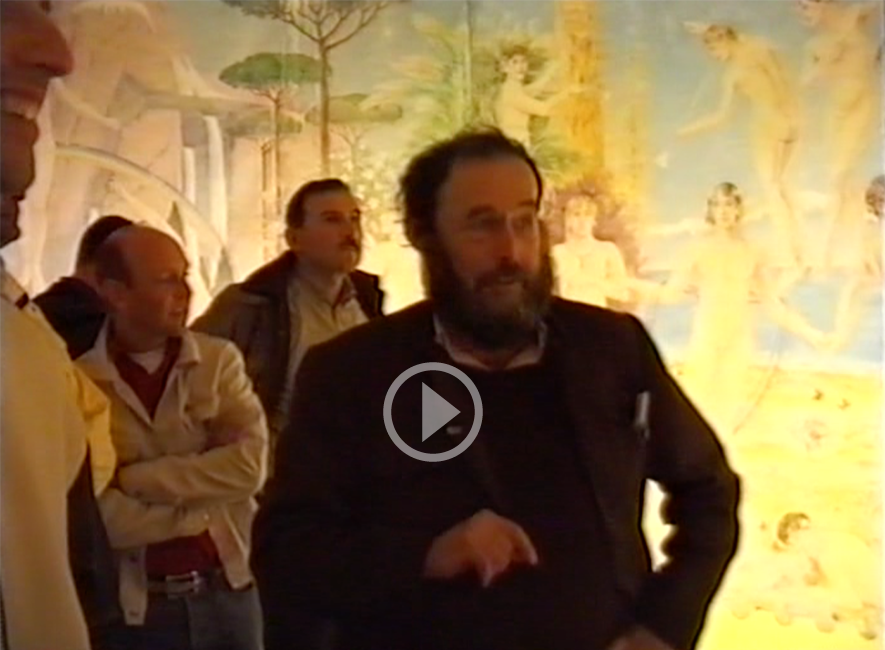 Comments on Szeemann's statements in the videos

It was where the annex of today's hotel with the restaurant is located and also served as a restaurant / dining room. The pavilion with the round image of Elisàr von Kupffer is slightly elevated behind this place. 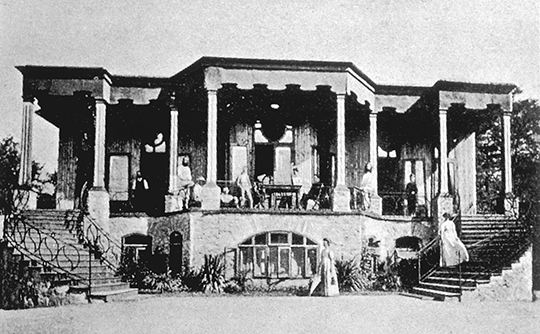 The German painter, illustrator and graphic artist Fidus (Hugo Höppener) determined with his works lasting images of the Theosophy and the Lebensreform since the 1890er years. He visited the reform colonies in Amden above the lake Walensee and the Monte Verità above Ascona. His masterly visualizations of temple projects and life-style of the Lebensreform are still a model for many who try to be an artist. His megalomaniac project of a Temple of the Earth and other temple projects.

Model with a striking resemblance of body and facial features to the artist. Elisarion painted the youths of the cyclorama after this model. 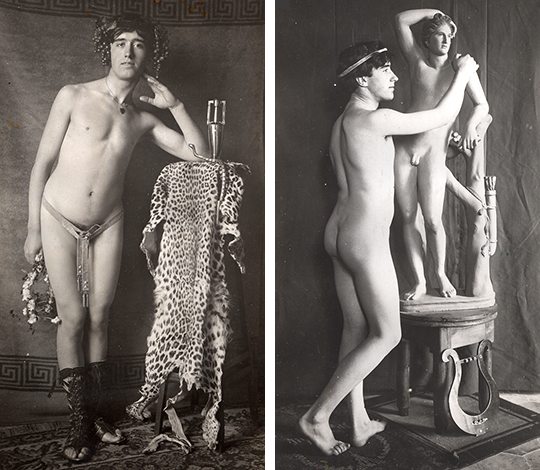 Painter of early Renaissance, who mainly painted frescoes for various churches and chapels in Tuscany, Umbria and Rome. Between 1459–1461, Benozzo Gozzoli painted the family chapel of the Palazzo Medici Riccardi in Florence with frescoes «The Journey of the Magi». These frescos were a source of inspiration for the cyclorama «The Clear World of the Blissful».

In the spirit of the early Renaissance, the Florentine Sandro Botticelli created altar pictures, portraits of the Medici, allegories and depictions from the Greek mythology. His most famous picture is the birth of Venus / Aphrodite, which was born from the foam of the sea (ejaculate of the godfather Jupiter / Zeus) before Cyprus. Some elements of his painting were taken up again by the Pre-Raphaelites in the 19th century. Art Nouveau made bonds with him too, a counterpostage to the work of Elisàr von Kupffer.

Painter of symbolism and founding member of the artist group Les Nabis. Denis is regarded as the most important theorist of this group. On his travels in Italy between 1890 and 1895, he studied the works of the Renaissance. From 1919, he sought to revive religious art and founded together with Georges Desvallieres Les Ateliers d'Art Sacré, some of his works.

Pleasing games they do not hurt in paradise

There was a small booklet entitled «Gespräche aus der Klarwelt» (Talks from the Clear World) on the cyclorama. The 33 scenes are described in verses – verses of great beauty, but also childish-kitschy and intellectually tormented ones.

Some Passages point to the paradisiacal conditions: «Whether I wander on high mountains, never surrounded by lightning, I am immune from dangers, from a snowstorm, a crash, a death!» Or quite clearly: «This dashing young man, well I do fancy, wants to be nasty.»

One has tried to see it ironically

The Sanctuarium Artis Elisarion was built in 1925. Elisàr von Kupffer exhibited in it his paintings, including parts of the cyclorama. In the early days, there was a pleasing stream of visitors, which dried up as a result of the economic crisis of the 1930s. One of these visitors was the German literary Kurt Tucholsky, who put a visit to the «Polysadrion» in his novel Gripsholm Castle: «It's where a couple of Balts built a house for themselves. One of them, Polysander von Kuckers zu Tiesenhausen, imagines he can paint. But he can’t. …» The Elisarion has entered this way into the great literature of the world. Tucholsky and the Elisarion.

The Swiss satirical literary magazine «Der Grüne Heinrich» published on December 1945 a report of a visit to the Sanctuarium Artis Elisarion. The staging in the house was made ridiculous, the visit of three members of the Federal Council was reported as an intellectual and political stupidness and part of the visit to the «Polysadrion» by Tucholsky was reproduced. Satirical report in «Der Grüne Heinrich» (German)

In the Elisarion, after 1939 one entered through a dark «crypt bridge» into the rotunda annex. This was illuminated by a natural skylight. It is planned to stage this again in a similar way after the restoration. Through a dark entrance area one reaches the cyclorama «The Clear World of the Blissful», which is roofed with a canopy, so that the artificial skylight evenly falls on the canvas.

A place where many people feel energy and claim to be able to absorb it. The microclimate, the vegetation of the surroundings and the building structure are the most important prerequisites for a power location. People experienced in dowsing are also in the opinion that part of the positive energy is hidden in the underground. Often, scientific investigations can measure a magnetic anomaly (stronger magnetic field than in the environment). It is quite conceivable that this results in a bundling of the natural ionizing radiation from the solar wind and other atomic particles. The founders of Monte Verità ordered «telluric» measurements and concluded by the result, the place has a positive effect on the animal magnetism.

The sun worship on Monte Verità

Before 1900, it was customary for wealthy people to show their richness through elaborated dresses in which one they could hardly move.

The aim of the life-reformers was to revive physicality and naturalness, wich have been lost in the process of civilization, by artistic dancing movement. The Monte Verità offered an ideal setting for it's summer school of dance under the direction of Rudolf Laban. The mountain and its surrounding provided idyllic open air places calling for dancing to the 20 to 25 female participants.

The culmination and end of Laban’s work was in 1917 with the production of Songs to the Sun on the «anational» congress of the Oriental Templar Order. From the sunset of the 18th to the sunrise of the 19th of August, this legendary open-air performance took place. The three parts The Falling Sun, The Daemons of the Night and The Winning Sun, combined course dancing uniquely with the given topography and natural light conditions.

The German poet and co-editor of Blätter für die Kunst (The Sheets for Art) lived from 1931 until his death in 1933 mainly in Minusio.

From about 1892, like-minded authors gathered around Stefan George, who were spiritually connected to him, the exclusive George-Kreis emerged. In his youth, George pleaded for a turning away from the very popular realism and naturalism in German literature at that time, and for a turning to symbolism. The three brothers Stauffenberg, including the later Hitler assassin Claus von Stauffenberg belonged since 1923 to the George-Kreis. His later work resemble in many ways the literary work of Elisàr von Kupffer and Eduard von Mayer. In addition, George also was erotical attracted by young men.

On the advice of his doctor, George moved to southern climate for health reasons. Whether the proximity to Monte Verità or a friendship with Elisàr of Kupffer and Eduard von Mayer played a role, is evaded by historical evidence – and is vehemently denied by the «Georgians». Eduard von Mayer stated in a report in the L’Eco di Locarno (1955, Italian) that no personal contacts existed, but stated as well some friends of George did visit the Elisarion.

Gloeden is considered one of the pioneers of artistic male nude photography. A severe pulmonary disease led him move for health reason in 1876 to the southern climate of Sicily. He became famous for his acts of Sicilian youths with antiquating props and costumes, which suggest an Arcadian antiquity. It was possible to buy prints of his works in Taormina, and they were wandered around in homoerotic circles. There are striking similarities in the work of Elisarion.

Diefenbach is regarded as the father of the alternative movements, as the most important pioneer of the Lebensreform, of Naturism and the peace movement. His Landkommune Himmelhoch (1897–1899) in Ober Sankt Veit near Vienna was a model for the reform settlement Monte Verità above Ascona, founded by his pupil Gustav Gräser. As a painter, he is an independent representative of symbolism.

After the bankruptcy of the artists' commune of Himmelhoch, Diefenbach moved to the island of Capri, where he gained success and prestige while he was forgotten in Germany. He died there in 1913 at the age of 62 years.

According to Szeemann, he visited Monte Verità with Frieda von Richthofen, then they went to Capri and after to Taos in New Mexcio.

The visit of Network on Monte Verità

Members of the Association Network took part in a cultural trip to Monte Verità. In an exclusive tour, Harald Szeemann showed them the exhibition at the Casa Anatta, took a walk through the historical site with them and explained them the cyclorama «The Clear World of the Blissful» by Elisàr von Kupfer. The whole was filmed with a video camera and cut to an approximately 1-hour video. The recordings were made on 10 October 1998.

For easier handling, the video is now divided into 3 sequences – it is also available in the original integral version. 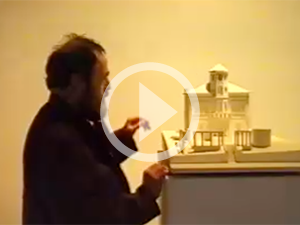 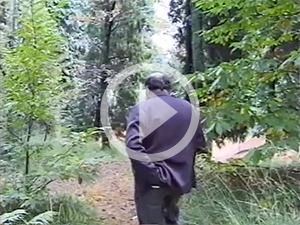 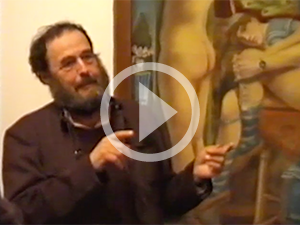 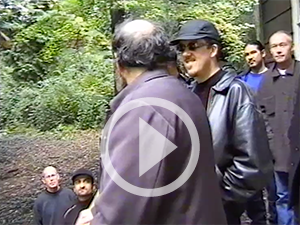 The Elisarion as a Gesamtkunstwerk

The cyclorama The Clear World of the Blissful is the pictorial principal of Elisàr von Kupffer. It was conceived as a place of enlightenment – the experience of paradise – to which one reached after the dark passage of the world-wide confusion. The basis was a monistic world outlook – the clarism – which was presented by Elisàr von Kupffer and his companion, Eduard von Mayer, in several philosophical writings. Elisàr of Kupffer, from 1911 onwards, called himself only Elisarion and saw himself as a religious founder. The Sanctuarium Artis Elisarion in Minusio (short Elisarion) was a temple, picture gallery and dwelling-house in one. The staging also included a lyrical description of the 33 scenes of the cyclorama (German) as well as the pilgrimage (walk, German) from the Locarno train station to the Elisarion and through the house to the cyclorama.

P.S. In the first period of the Elisarion, the visitors were warned that the Elisarion is NOT to be viewed simply as a painting gallery, but as a place of «inner enlightenment» and had to sign in this respect a confirmation ... Extracts from the guestbook 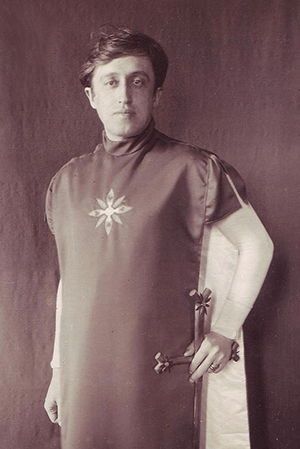