The mystery of the sexes

Eduard von Mayer wrote numerous works about the scientific and religious theories of Clarism. In this claristic understanding therefore trend blissful primordial cells to an over the sexes future state.

In his 1923 published work “The Mystery of the sexes”, he responded to gender theory discourses of his time — and in particular the sexual inter-stage theories of Magnus Hirschfeld.

The figure of the Araphrodit (Ares / Aphrodite) is discribed fundamentally, which is seen in most of the paintings of Elisàr von Kupffer. The Araphrodit as an ultimate goal — a claristic idealized vision of man who has overcome sexual boundaries.

The main pictorial work “The Clear World of the Blissful” must therefore be seen as an over the sexes paradise concept. 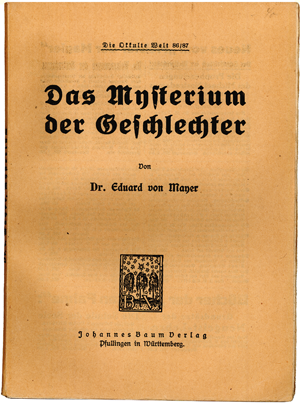