Like Eduard von Mayer, Elisàr von Kupffer had already started producing literature as a child. At the age of six, von Kupffer wrote the drama „Don Irsino”, further plays, some of which remained unpublished, followed in years to come. Between 1895 and 1900 he produced several volumes of poetry, plays, and novellas.

From 1900 onwards, the two men started to develop an extensive literary oeuvre that was dedicated to the representation and propagation of Clarism. Some of these works are composed as religiously motivated, scientific texts, others are more philosophical. By the same token, mathematical calculation tables can be found next to art historical theories.

All in all, „Das Mysterium der Geschlechter”, „Fürsten und Künstler”, „Pompeji in seiner Kunst”, „Die Zukunft der Natur”, „Was soll uns der Klarismus”, „Hymnen der heiligen Burg” make up several thousand pages. Most of these works were published by the Clarists themselves in their own publishing house. In addition, unpublished works, correspondences, and hundreds of articles by the two men can be found in the archive.

„Lieblingminne und Freundesliebe in der Weltliteratur” (Love of Favourites and Love between Friends in World Literature), which was published by Adolf Brand in 1899, is von Kupffer’s only reissued work. To this day, it is classed among the standard works of homoerotic literature and is the key to the author’s oeuvre.

The poems in this volume come from an array of different sources and places such as ancient Greece, the Roman Empire, the Bible, the Arab world, Japan, Renaissance Italy, Elizabethan England, and 19th century Germany. The book also contains a few selected poems by the editor himself.

At the time when von Kupffer wrote the book, a compilation of this kind did not yet exist so that extensive research was required in order to find suitable texts. This undertaking was further complicated by the fact that translations of poems in foreign languages either did not exist, or had been falsified by homophobic censoring, for instance, by replacing masculine with female pronouns. Consequently, von Kupffer’s initial task consisted of translating numerous poems and also in finding friends to translate those which had been written in languages he did not know. In view of these difficulties, the fact that von Kupffer’s selection of poems has become both a classic and an integral part of gay poetry is impressive.

Elisàr von Kupffer compiled this anthology partly as a protest against Oscar Wilde’s imprisonment in England.

The very political introduction that Elisàr von Kupffer wrote in Pompeii in 1899 is any bit as interesting as the anthology itself. He argues that homosexuality should not only be tolerated by society, but that it should in fact become one of its cornerstones consisting of (primarily platonic) homo-social relationships between boys and men, and men with one another. In his opinion, this would strengthen society far more than heterosexual relationships alone ever could.

Elisàr von Kupffer also contradicted the concept of „the third sex”. According to him, this term had been invented by the gay rights activist Magnus Hirschfeld as a way of achieving the legal acknowledgement of homosexuals and of abolishing the existing laws against homosexual practices. He was also against a revisionist interpretation of history according to which historical figures such as Alexander the Great or Julius Caesar were portrayed as homosexuals. Von Kupffer’s conclusions were defined by the assumption that the modern concept of homosexuality was based on the feminised male behaviour associated with the third sex which, in his eyes, simply did not apply to the times.

Furthermore, von Kupffer criticised the „female cult” which he claimed came from imperial France and the court of Louis XIV. He believed that a climate in which relationships between men and women were encouraged while connections between men were treated with suspicion was harmful to society. In his opinion, a society that supported only heterosexuality was in danger of becoming comparatively lonely, and, to a large extent, lacking in social interaction and culture on a greater level (as was the case in the Greek Polis, for instance).

However, in spite of his claim that, like the ideal Greek citizens of the past, modern men should be both decidedly masculine in their behaviour and cultured enough to have homoerotic and homosexual relationships, von Kupffer made sure to point out that he was not a misogynist, and that misogyny was actually predominantly found among heterosexual men who felt unconsciously restricted in their marriages.

In many ways, this introduction is still relevant today. The divergences between von Kupffer and Hirschfeld resurfaced later on in similar discussions between Adolf Brand and Hirschfeld and, from the 1960s onwards, between the advocates of pederast relationships and the supporters of the mainstream trend within the gay liberation movement.

The basic question is whether homosexuality is merely an alterative to heterosexuality, thus requiring equal rights, such as marriage, or whether it is more important than heterosexual relationships, that is to say, an integral part of society which is valuable to society due to its connections, regardless of age differences. 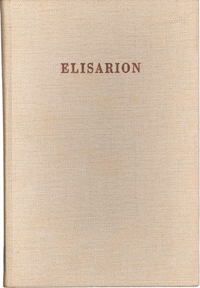 Aus einem wahrhaften Leben (From a honest life): the autobiography of Elisarion 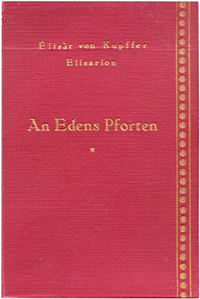