Eduard von Mayer was born in Analowo near Saint Petersburg as the seventh child of Charlotte von Mayer and the physician Dr. Karl von Mayer, founder of the protestant hospital of Saint Petersburg. The von Mayer family was of German descent and belonged to the Ukrainian aristocracy.

Little is known about his childhood. According to Eduard, his parental home was defined by a pietistic atmosphere due to his mother’s influence who he claimed had the “personality of a mother superior”. He was educated by theologians. Besides German and Russian, he could also speak other foreign languages at an early age. His family did not support his literary efforts, and visits to the theatre were forbidden – they believed activities of this kind were sinful.

At the age of 13 Eduard fell in love with the young Elisabeth von Stackelberg during a summer holiday in Reval. This love awakened the realisation in him that “personality was a reason for existing”. However, it remained unfulfilled and confirmed the ascetic attitude that had been instilled in him, and inspired an “enmity towards happiness”, as he put it. By the age of 17, his “melancholy” disposition verged on the suicidal. In this state of isolation he concerned himself with the study of nature and developed a deep dislike of Christianity which he described as “subordination and deprivation of will”. He felt drawn to monism and hoped that the propagated denial of a superior god would lead to liberation from the “heavenly oppressor”. However, it was not long before he also wrote this “dictate of nature” off as a “suicide attempt by personality”.

On 15 August 1891 — by this time he had already finished school — he became acquainted with Elisàr von Kupffer in the garden of his parents’ villa. Elisàr later described him as “completely wound up in his feelings, very hospitable, but unapproachable. It was this acquaintance that finally helped Eduard von Mayer to distance himself from his pietistic upbringing and to pursue his interests in theatre and fine arts.

In 1894 Eduard von Mayer’s mother decided to move several family members to Lake Geneva due to health problems. His time as a student in Switzerland did not help him to find answers to his “charging battles with God”. His religious questions were “temporarily satisfied” by Schopenhauer “because of the philosopher’s lust for the negation of life”. These studies and also the end of his relationship with Elisabeth von Stackelberg cast him into a severe crisis which culminated in a suicide attempt. However, it also led to the “recognition of self-will”. Elisàr von Kupffer wrote that Eduard von Mayer was:

“becoming steeled in his own way, so that after further battles he could become the life companion of my message.”

During this time, von Mayer concerned himself with Nietzsche’s works with whom he felt an instant kinship. However, he refrained from a too intense study so as not to influence his original thoughts with this affinity.

In 1897 he concluded his studies in Halle an der Saale with a dissertation on Schopenhauer’s aesthetics and their relation to Kant and Schelling’s aesthetics. In the course of the following years, he developed the perception of animated, independent power points, so-called “Aktiden”. This concept was based on the scientific theories of the times. In accordance with Clarism, he countered Nietzsche’s “Will to Power” with a “Will to Action”. He questioned the efficacy of scientific methods of perception in many essays. It was not long before he discovered the “increase of world value” and arrived at an “organic belief”. He explained these ideas in his monumental multivolume work on the future of nature which was published by the Claristic publishing house in 1916.

From 1897 onwards, the events in his life coincided almost completely with those in Elisàr von Kupffer’s life. Together they developed and corroborated in the theoretical writings on Clarism. In spite of — or in his opinion — because of his highly developed intellect, Eduard decided to defer to Elisarion’s work and to withdraw his authorship. “That which I came to understand and herewith affirm” he wrote “is the fruit of life from Elisarion’s tree.”

The question regarding the authorship of key works of Clarism such as “Was soll uns der Klarismus — eine menschliche und soziale Neugeburt” (What Can Clarism Give Us — A Human and Social Rebirth) and “Ein neuer Flug und eine heilige Burg” (A New Flight and a Holy Castle) remains unanswered. Were these theoretical essays really written by only one of the protagonists of Clarism? Did they not rather develop in the form of a dialogue? Eduard von Mayer’s interests were widespread: in professional circles he was certainly known as a mathematician due to his discovery of the spiral prime number law.

During his lifetime, his art historical works also found recognition. “Pompeji in seiner Kunst” was published in 1904, and translated into English in 1907 under the title “Pompeii as an Art City”. “Fürsten und Künstler — Zur Soziologie der Kunst in Berlin” (Rulers and Artists — The Sociology of Art in Berlin) appeared in March of the same year.

For Eduard von Mayer the time after 1927, that is to say, after the development of the sacred site seemed to be completely defined by the new faith. While Elisàr von Kupffer’s contribution to the implementation of Clarism consisted mainly of designing an iconographic programme for his faith, Eduard von Mayer dedicated himself to publicity. In other words, he presented Clarism in renowned newspapers and magazines, gave lectures and showed slides, and got in touch with different kinds of organisations at conferences. He saw himself as an ambassador, as the spearhead of Clarism, and as a link between Elisarion, the religious herald, and the world:

“Elisarion patiently took it upon himself to turn me into the first disciple of his life’s message; that is why I am particularly qualified to show many people the way to liberation. For them I have prepared the first path to the watchtower of clarity, to the sacred castle of Clarism, Elisarion’s work.”

Eduard von Mayer spent the years after Elisarion’s death in 1942 documenting and securing their communal achievements. During four years of work, he not only assessed the library of the Sanctuarium Artis Elisarion, but also created an inventory of the surviving letters, sketches, drawings, plans, and paintings which included 2400 items.

According to current insights, this process of archiving also entailed a kind of “purging”. Clearly, Eduard von Mayer had been worried about a defamation of the oeuvre after his death. Intimate correspondences between the two men, but also documented evidence of his contact with well-known individuals such as Magnus Hirschfeld seem to have vanished even before 1960, the year of his death. There are also practically no traces of the men’s collaboration with “Der Eigene” (‘The Queer One’ or ‘The Individualist’), the first magazine for homosexuals, of contributions in Hirschfeld’s “Jahrbuch der sexuellen Zwischenstufen” (Yearbook of Sexual Inter-stages), and authorship of the work “Das Mysterium der Geschlechter” (The Mystery of The Sexes), a Claristic theory of the sexes. Furthermore, von Mayer’s novel from 1902, “Falsche Feuer” (False Fires), a critical approach towards German-Protestant Saint Petersburg, which had almost caused a break-up with his family, received practically no mention in relation to the Claristic testimonials. This also applies to the successfully marketed works by his older sister Sonia E. Howe. 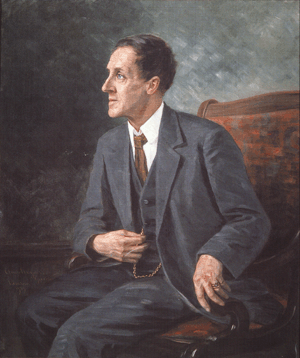 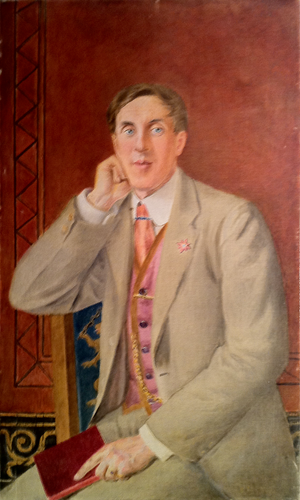 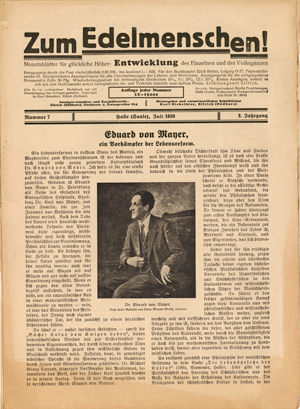 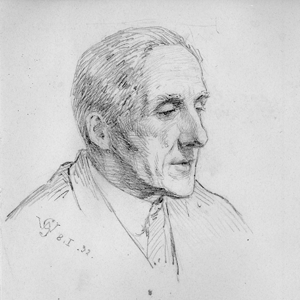